The vespers picture forms almost the moment between the sinking in the lap and the corresponding upward repatriation.
Although not an attempt to translate a sculpture into sound, the two bodies seem to be in gentle motion while there is sounding a music that is one of contemplation, of immersing itself in the interplay of the two separate figures.
The guitar tone and its here specific type of "mezza voce-touch" create – entirely from the inside, withdrawn and in contemplation – a floating sound space in which (with simultaneous perception of the group of figures) pain and pity could possibly become more tangible and an idea of salvation even more palpable. 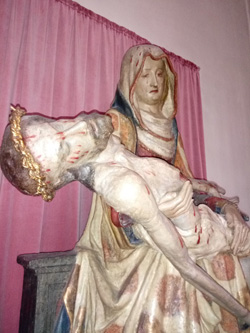